I recently posted a photo of a defective Bicycle playing card across my social media accounts and it got way more attention than I expected. I noticed that most people were talking about the poor quality of Bicycle cards. So, for this blog, I’ll share with you what I’ve noticed after about twenty years of working with Bicycle decks.

Roughly twenty years ago, I used to buy Rider back Bikes exclusively from wholesale clubs like Sam’s Club, Costco, and BJ’s. The quality was second to none. The decks were traditionally cut and they were consistently awesome decks of cards. Then, as we all remember, the USPCC changed to the Standards we see today. The box design changed, the card stock got thinner, the finish changed, and the feel and overall quality of the cards diminished. And, wtf happened to the pull tabs on the shrink-wrap?!

This didn’t mean that the cards were unusable. It just meant that every so often there was a deck that was a little rough around the edges. Or, perhaps a deck felt considerably thinner. These weren’t defective decks. I could still do faro work and estimation just fine. The biggest problem for me was the new design on the back of the card case. So, I printed my own stickers of Rider back back designs and solved that issue. Life moved on.

Over the next few years, I noticed more and more that the quality was inconsistent. The decks were mostly still useable, but I noticed that I was opening a deck before a show to make sure they were okay to use. Some decks simply would not faro due to the poor edges. I opened one deck and found that there was no finish on any of the cards. Tabled doubles were a dream. That’s the only thing I could do with that deck. There was a day when I could open a deck right from the shrink-wrap during my act. Those days are gone when it comes to the Standard Bikes.

Then, along came the Cadillac of quality playing cards: Richard Turner’s Gold Seals. This deck was everything that the old Rider back Bikes were and more. They’re traditionally cut, great card stock, and consistently above par with the quality control (…except for that damn gold seal sticker that’s stuck to the box with the strongest glue on the face of the planet.) They’re about $3.50 a deck but they’re worth it. So, now Turner decks are what I use most often. Pro tip: If you use Gold Seals, remove the gold sticker. Lay people read this and think, “Oh I see… he’s using specially cut playing cards. That’s how he does it!”

On average, I buy around 7-800 Turner Gold Seal decks of cards a year. I just started doing my taxes and noticed that I bought eight cases of Turner Gold Seal playing cards this year—not eight bricks, eight gross! That’s over 1000 Turner decks! Out of thousands of decks, I’ve only come across two decks of cards that were unusable. One deck was missing the Ace of Hearts. The other deck had a defective Six of Clubs. The card had a severely offset cut. Every other deck was fine. That’s not a bad track record. In probably close to 10,000 Turner decks, these were the only two bad decks I can remember. (If you’re wondering why I use so many decks, in one walk-around gig, I’ll burn though about 10 decks between MCF effects, tearing, signing backs, and giving away cards as souvenirs. In a formal show, I usually use 2-3 decks and I always give the cards away. Between practicing and performing, I usually go through 7-800 a year.)

That doesn’t mean I don’t still use the Standard Bikes. This year, I bought 15-20 bricks of Standards from BJ’s. Only a handful of these cards had rough corners or the registration was a bit off. All the decks were usable. Although the quality control has lessened with these cards, they’re still worth it to buy at about $1.25 a deck. So, if you don’t buy Standard Bikes because you think the quality is bad, consider that 98% of the time, the cards will be fine. For my formal shows, or a television appearance, I’ll always use Turner Gold Seals because I have 100% confidence in those decks. However, for walk-around gigs where I’m ruining cards, I’ll usually use the cheaper Standard Bikes. When practicing things like centers, MCF, palming, and sleights that are hard on the cards, Standards are my go-to deck. Also, if a deck is so poorly cut that you can’t do faro work, you can still practice plenty of other sleights with these cards. The same goes for a deck with bad registration. Don’t perform with them. Just set it aside and use it for practice.

Other decks that I use that have consistently high quality are: Bee’s, Steamboats, Aristocrats, Tally Ho’s, and Penguin Elites. These are really the only cards that I work with. I mainly perform for lay audiences and I want the cards I use to be recognizable to them. 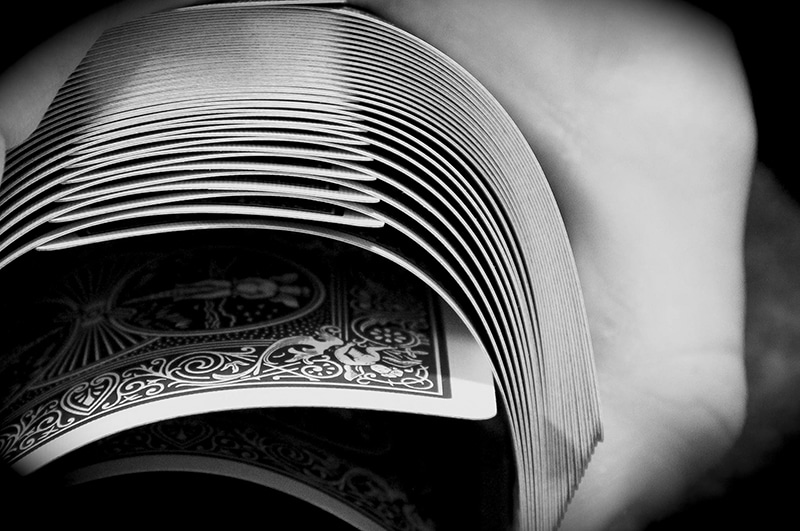