I’m a long-time fan of your work, since even before Confident Deceptions. What made you write this new book? What were your goals this time out?

I want to create something that lasts forever. After I’m long gone, I hope to have a collection of books that any card enthusiast will enjoy studying. I want to inspire future card magicians to think outside the box.

I wanted to show that you could still create new effects and new premises. Card magic has been around for hundreds of years. Some magicians think that there are only a handful of effects out there and that anything created today is just a variation on a classic. I disagree. There’s no limit to creating new material. Some creators will add an Elmsley count into an effect and then think it’s a new effect. Or, they’ll add a new climax that makes no sense like Out of This World with a color changing backs finale! (If you think that’s a good idea, don’t buy my book!) Game Changer has brand new effects and plots and classics that have been overhauled.

And finally, I wanted to write a book with clarity. This book has thorough and detailed write-ups of the effects and sleights. I included large full-color photos (225 photos in fact) to make sure that you can learn the effects easily. I remember reading card magic books as a kid and seeing small poorly taken photos or horribly drawn hands, or no photos at all. I said to myself, if I ever write a book I want huge photos! And that’s just what I did. My goals were to write a better book than my last. I honestly believe I did just that.

How long has this book been in the works?

Honestly, I was writing this book while I was writing Confident Deceptions. I felt like eighteen effects was enough for my first book. I had another fifteen effects that were written up at the time. However, I felt like they needed more performance time. What completes an effect is years and years of performances in front of lay audiences. Everything in Game Changer has been thoroughly audience tested. So, to answer the question, I started writing most of the material in the book around 2010.

So, you’ve been field-testing the material in this book for regular audiences that long? What’ve the reactions been like?

If it doesn’t consistently great reactions every performance, it doesn’t make it into the book. What’s the point of releasing bad material? Some notable effects in the book are Catch Me if You Can. It involves a contest between you and the spectator that always gets the whole crowd cheering. Nick of Time has a very suspenseful race against the clock that audiences love. Lucky Charms is a version of Card in Ring Box and Dream Card that has a truly shocking finish. My good friend Mike Vincent is closing his show with this effect. I could go on, but you’ll see that everything in the book is killer material!

Where’d the title Game Changer come from? What exactly does that mean?

I wanted to change the game. I wanted to create material that’s powerful and shows mastery and skill. I wanted to create material that shows the performers confidence. There seems to be this thing in magic where magicians have to make fun of themselves. That’s not me. Some magicians want to do gambling effects where the spectator wins. That’s not me. I’m a master card mechanic showing off my skill set. It’s appropriate that I win, and lay audiences love to see this happen. It’s okay to be cool and confident. It’s okay to have presentations where you speak and connect with your audience (rather than just showing a fifteen-second special effect.) It’s okay to be the winner every time. It’s okay to do effects that use sleights, concepts, and subtleties with a regular deck rather than just using gaffs.

Who’s the audience for this book? What kind of skill level does this material require?

It’s a book that includes nothing but polished and well-designed material. You can take the effects right from the book to your show. It’s a look at the proper use of theory and it’s a look into creative process. You can see how old sleights are put together in new ways. You can see how a well-defined character helps justify the effects. See how I use scripting, character development, premise, and dramatic structure to connect with my audience. It’s a look into how I made a career out of performing card magic.

Like Confident Deceptions, there’s something for everyone. There are effects that you can do with just a basic understanding of card magic, like Standing Out and Catch Me if You Can. There’s material in there that will take some effort. I’d say that if you’ve read Card College and studied card magic for a few years, you’ll be able to do just about everything in the book. And, for the connoisseurs of sleight of hand, there are one or two effects in there that will require some practice. One of the closing effects, Power Play is a good example. In this effect, you deal five hands of four of a kind from a shuffled deck. The Art of War is another example. You play War with the spectator, (from a deck that’s been shuffled by the audience) and you win each hand no matter how many advantages you give them. All of the effects are done with a regular deck. This way, everything is practical. What good is buying a book and finding out all of the material requires huge setups and/or gaffs?

How much material is in the book, and how much of it is gambling-related?

I also took the time to teach a lot of the sleights I use most often. For example, you’ll find a very in depth descriptions of the MCF, N.E. shift, the Pinky Count and much more. I’ll also reference where a sleight is written up if I don’t teach it.

When is it available?

I’m happy to say that the wait is finally over. This book will be available on my website and through Vanishing Inc. later this week! 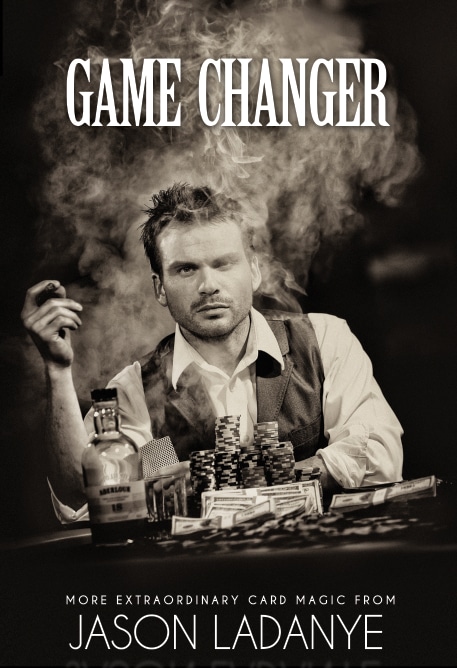